Culture and a lot of nature 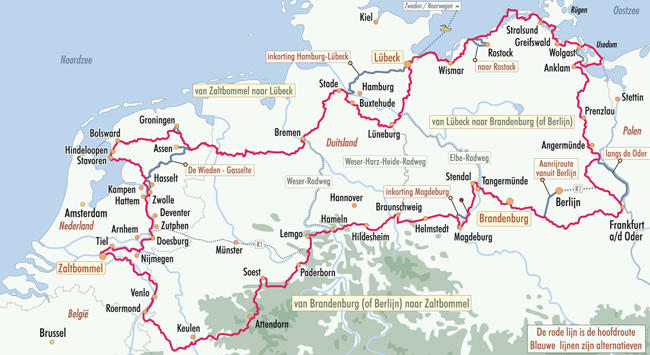 Introduction
The Hanse (Hanseatic League) was a medieval league of commercial towns that came into existence since a large number of merchants in Northern Germany had begun to co-operate.

A cycle route of 3000 km has been set up along a large number of these ancient Hanseatic towns in The Netherlands and northern Germany. This route and the towns are described with great detail in three booklets, together forming the Hanseatic cycle tour.
Four years of work have been spent in setting up the route. All of the books have now been published and are for sale in Dutch bookshops.

Although the route is mainly targeted for camping cyclists, it will also be very suitable for those who want to stay overnight at hotels. Notwithstanding the Hanseatic towns being the key points of the route, it is first and foremost a cyclists’ nature trail leading through a large variety of unrivalled scenery and pleasent and quiet landscapes. 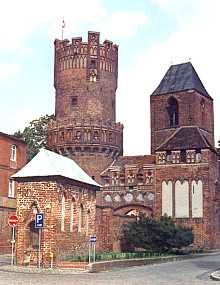 The Hanse reached its heyday in the first decade of the 15th century. At that time the league had developed into a powerful economic organisation with trading stations in various regions and had succeeded in negotiating all kinds of privileges, resulting in trade monopoly. At the height of its existence more than 200 towns had become a member. About 75 of them formed the hard core and were therefore entitled to attend the "Hansetag", the highest governing body within the League.

The main Hanseatic towns are situated at the coasts of the North Sea and the Baltic Sea, along the main northern rivers and in Westfalen. Typical of the northern Hanseatic towns is the gothic building style called 'brickgothics’, which originated in the 13th century. Instead of using natural stone, the main buildings, e.g. town halls, churches, guildhalls and town-gates, were built from brick (see the picture of the town-gate of Tangermünde). Much of this medieval architecture can still be seen in the former Hanseatic towns.

The route
This route leads through a large number of Hanseatic towns. Because it is impossible to pay a proper visit to all of them, only a selected number of towns are included in the description of the route. In a number of Hanseatic towns the route leads right across the centre, in some towns a small detour is made along the sights and as for the other towns is concerned, directions to the centre are being referred to. Those who would like to do so can take their time for sightseeing.

Choices
The Hanseatic route mainly follows quiet secondary roads, cycle tracks, country and forest roads. Very poor sandy roads and off-road tracks are avoided as much as possible; however, in those cases alternative routes are offered. Our aim was when setting up the route, that one should always be able to continue to cycle, albeit sometimes at a lower pace. Depending on the weather, the quality of some forest or country roads may vary considerably. After long periods of dry weather these roads get very sandy (rough) and incidentally you may have to walk for a few hundred meters. A heavy shower will turn these roads into muddy tracks with plenty puddles of water. Nevertheless, these roads were chosen because the alternatives are busy traffic roads or thoroughfares.

Also for the author himself it was sometimes difficult to make a choice from all alternative routes. The main prerequisite, though being a challenge as well, was that the route should lead from one Hanseatic town to another and that there should be a sufficient number of camping sites along the route. Another issue was that only roads with no or minor traffic load were to be considered, and that the route should offer plenty of variation.

I welcome your response